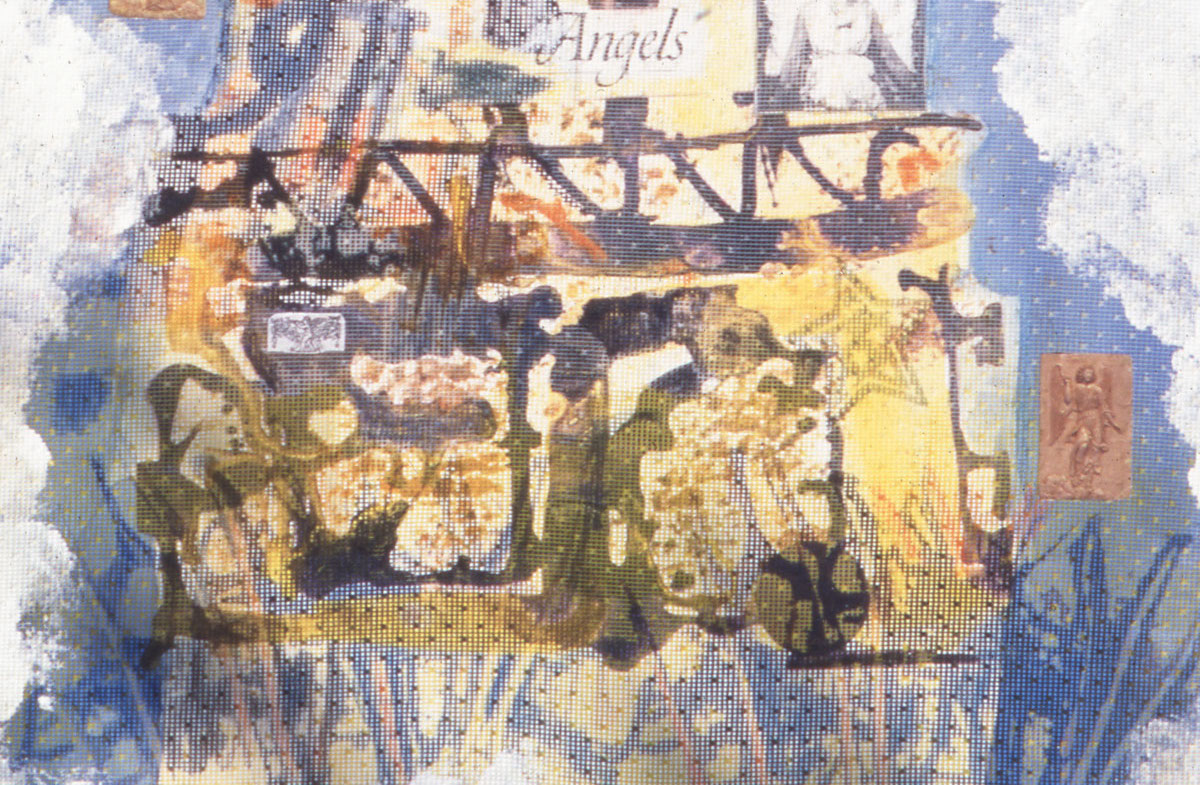 Artist Marilyn Gross mulled. That was her style.

She would meditate, gradually clearing herself.

‘Listening for a nudge’, she would ultimately begin.  Then, following each nudge, one after another, she would continue. No expectations, no intentions of what this or any other painting should or would be.

Her only goal was to create art that is alive, that heals and inspires.

Her studio in Gulf-Coast Florida was filled with her works; award-winning works, works in process, and an ever-present aura of creations that had yet to breathe.

Each began similarly: a canvas or paper, utter emptiness. Each work would unfold over weeks or months until each said, “complete”.

Now, late one morning in the Fall of 2000, like hundreds of times before, Marilyn sat mulling yet another blank canvas…

Concurrently, continents away, creativity of an opposite form was germinating.

Unknown by Marilyn and most of the world, terrorist tribes were actively envisioning and masterminding a global day of terror.

Mere miles from Marilyn’s Studio, at least two prospective hijackers were engaged in flight training at a local airport in Venice, FL.

Amidst her studio, opening herself to the art that wants to express itself through her, Marilyn began.

She reached out, making the first marks of change on the canvas.

Her brushstroke is unusually bold and heavy for her.

Feeling what she later referred to as ‘intensely dark energy’, she forged ahead.

Marilyn had engaged strong flowing energy before but this was different. Quite different. Unlike her more commonly sensed experiences of happiness and light, this energy was sad and dark.

As she ventured deeper into this creative flow, the intensity only magnified. Colors and movements emerging seemed conflicted and chaotic.

The energy was dark, intense and destructive.
The colors were conflicted and the motion was chaotic.
The feeling was profound sorrow.

As she opened her eyes, she noticed a small collection of books she had once read about angels. Curious and following a nudge, she began to review them anew.

Gradually, she began to feel a deep sense of Trust. Calm. Peace.

As the days and weeks progressed, she ventured more deeply into this canvas and its imagery, engaging its energies, and working with its process.

The angels are not battling, but rather transcending the darkness, bringing comfort, love and light.

Ultimately, Marilyn stopped. What she had first felt, then evolvingly seen in her imagination, now shown on the canvas.

Sensing a work was nearly complete she would set it out of view until she felt she could experience it anew.

Only then might she make some small adjustments or consider it complete. Like other special new creations she would then entitle it, choosing a name for it.

Sensing this work was complete, Marilyn entitled it Angels, Angels Everywhere, “broke the brushes”, and recorded its completion and details in her Artist’s Logbook.

9/11/2001 much of the world watched in horror and disbelief as hijacked commercial airliners were flown into the World Trade Center in New York, New York, USA.

The events of that day, caused 2,977 deaths, over 6,000 injuries, countless devastating impacts, and traumas to billions globally.

The world would continue to reel for years.

Most anxiously awaited and feared what was next, and for the sleeping giant’s replies.

A Clair-Intuitive Masterpiece Representing yet Pre-dating 09/11/2001

Within weeks of 9/11, Marilyn and members of her family and close friends came to discover Angels, Angels Everywhere was a very unusual and special work of art.

They came to realize the painting somehow mirrored much of the actual post 9/11 WTC site and its surroundings, even though the painting’s completion pre-dated those events.

The painting also perhaps mirrors some of what may have been otherwise unseen and hidden from our view at the site and its surroundings.

Altogether, Angels, Angels Everywhere conveys a very powerful message of hope, comfort and healing for all of us.

Please contemplate the canvas and consider its potential meanings and share.

There is so much turmoil in the world that I think... there should be something peaceful to look at.

Marilyn affixed this quote to the top of her main easel:

“Great Art is a collaboration between God and the Artist. The less the Artist does, the better.”

Marilyn devoted her life to Love, Peace, Healing & Harmony. Her works mirror these devotions as did her life.

Her hope would be you benefit from Angels, Angels Everywhere and its messages and unusual story of creation.